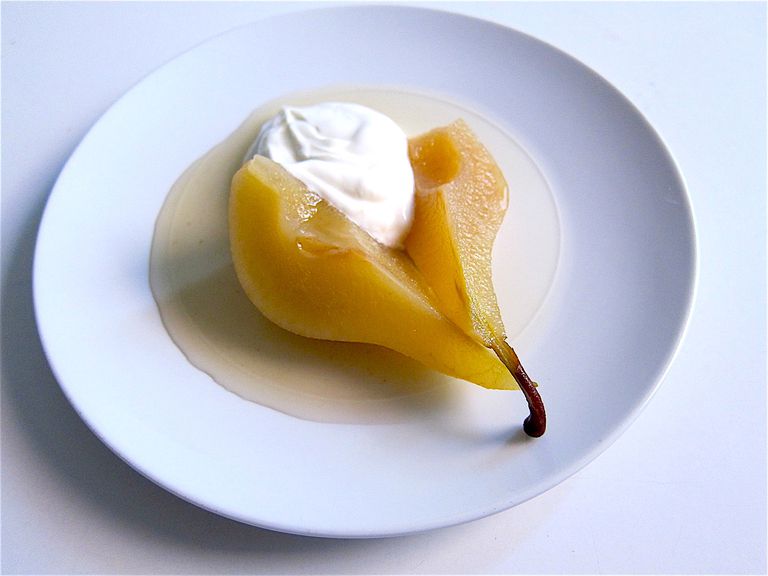 The poached pear is a quintessential dessert and one that makes a statement without much fuss. It also just happens to be vegan & gluten free by nature without the need for much more. I’ve made it one of my go-to’s for entertaining because it’s easy to prepare in advance. Not a single person will feel like they’re missing out (or left out due to dietary restrictions) if you serve this during the holidays. The touch of vanilla cashew cream is made with a secret ingredient (a small scoop of Further Foods Vanilla Collagen powder) which both thickens and enhances the “cream” component while adding a hint of vanilla.

When it comes to presentation and flavor this is a dessert recipe that anyone can pull off while looking like a pro.

Steep the chamomile tea in a medium stock pot. Remove tea bags and set aside.

Use a vegetable peeler to carefully the pears, leaving the stalks on top for presentation. Cut the bottom of the pear so it sets flat, then use a melon baller (or a rounded teaspoon works well) to core the pear from the bottom.

Place the peeled pears in the pot of seasoned chamomile tea, add the maple syrup, cinnamon stick, and ginger. Bring to a boil, then reduce the heat to low and poach for about 1 hour until the pears are fork tender.

In the meantime, to make the cashew cream: drain and rinse the soaked cashews. Add them along with the coconut milk, lemon juice, vanila collagen powder and maple syrup into a high powdered blender. Pulse until broken down, then run at a high speed until the cashew mixture is smooth and creamy. This may take some time, work mixture down with a spatula and add additional spoonful of coconut milk if needed to thin the mixture out (this will depend on your blender, a Vitamix will make it a breeze).

Remove the pears from the liquid. To serve, place a liberal spoonful of the cashew cream on a plate. Then place the poached pear on top. Season with a sprinkle of cinnamon. Serve warm or room temperature.