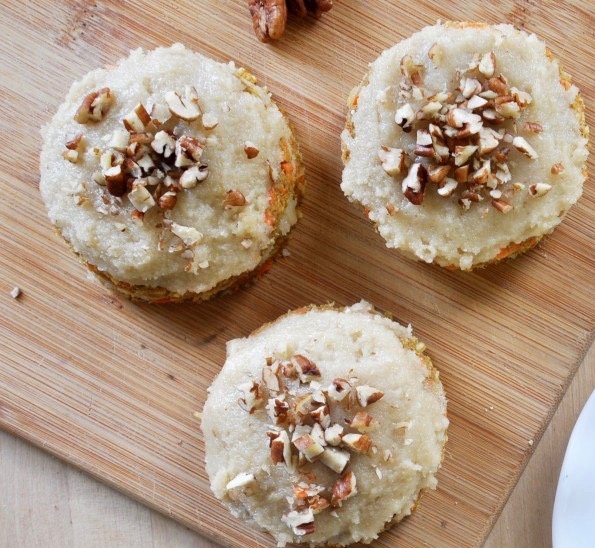 One of my favorite cakes is a Carrot Cake at a local bakery called, Sweet Lady Jane. I would order it for everyone’s birthday just so I could eat it, a bit selfish! 🙁 I had a burst of desire to have it again, but I know I wouldn’t eat it the way they bake it so I tried a raw vegan one.

I tend to have my sweets in the morning so I can burn off the sugar throughout the day. These are amazing for breakfast!

In a blender, combine the soaked and drained cashews, almond milk, raw honey or maple syrup, lemon juice, vanilla and salt. Blend on high until you have a smooth and creamy consistency. With the motor running slowly, lift off the top of the blender and drizzle the melted coconut oil in slowly. Once you have a homogenous mixture, shut the machine off.

Cover the frosting with cling film, pressing it onto the surface. Allow the frosting to firm up in the refrigerator for about an hour.

NOTES: I make the cashew icing in my Vitamix, because the high speed makes for a really dreamy frosting. I imagine this would work out alright in a food processor though, maybe a few more textural bits, but still tasty. Also, you want the icing to set in the fridge to a point where it becomes spread-able, not rock solid. You could probably speed this up in the freezer if you need to.

To prepare cakes, pulse roughly chopped carrots in blender or food processor so that they are finely shredded. Transfer to medium bowl.

Pulse oats in blender until fine powder is formed. Add dates and coconut oil and water and pulse until doughy texture is achieved.

Transfer mixture to bowl with carrots. Add shredded coconut, pumpkin spice and salt. Use hands to knead until batter is thoroughly mixed.

On a clean surface (or on top of a piece of parchment paper) use hands to flatten dough until it’s ⅓”- ½” thick. Use a circular cookie cutter (I use a mason jar lid) to cut circles out. Repeat until you have 8 circles.

Refrigerate for at least 30 minutes before serving.