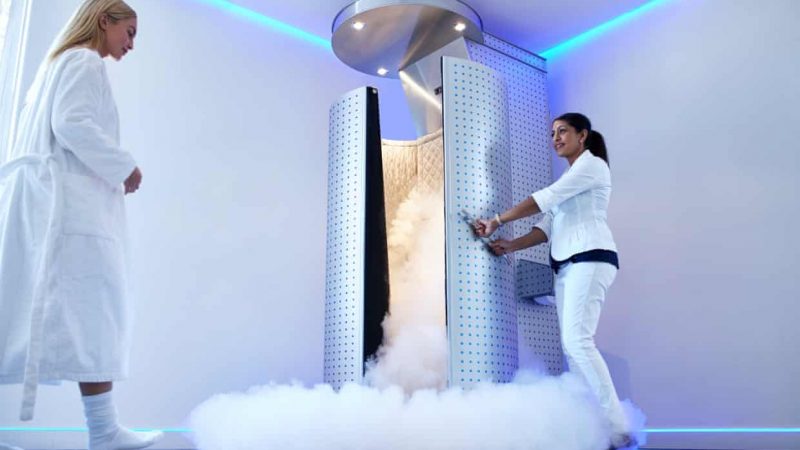 I am a warm temperature gal through and through. I grew up in the south-central part of Arizona and moved to southern California a number of years ago, so my body has very little experience with cold weather – and I like it that way. I rarely turn on my AC in the hot summer months because low 80s temperature is right about where I feel the most comfortable. As you have probably guessed, I am one of those people who would not dream of leaving the house without a sweater. All of this to say, that the thought of stripping down into my birthday suit and hopping into a tank filled with below freezing air has me unenthused at best. But with all of the recent buzz around cryotherapy, I started to wonder whether my aversion to cold might be worth braving for all of the incredible benefits that I have heard everyone talking about over the last couple of years. Before I decided whether or not to take the icy plunge, you better believe I did my homework to determine whether or not cryotherapy is actually worth all of the fuss.

Cryotherapy is a procedure involving cold air exposure where you enter a small room filled with freezing air for just a few minutes at a time. Three to four minutes may not sound like a very long time, but when your body is experiencing temperatures between -100C and -140C, you are going to feel it fast. But as psychopathic as that sounds, it has been all of the rage for some time now. The reason for cryotherapy’s recent surge in popularity is the fact that many professional sports players, like LeBron James, began using it as a way to treat their injuries. After that, the chilly trend was picked up by various A-List celebrities like Justin Timberlake, Jennifer Aniston and more.

The concept behind cryotherapy is a relatively simple one: as you probably already know, when you apply ice or other forms of cold treatment to an ailment, it reduces pain, sensitivity and inflammation. So instead of taking out the old ice pack from the freezer and applying it to an injury, people have turned to submerging their whole bodies in extraordinarily cold temperatures for similar effects within 24 hours after exercise or injury. Along with injury recovery, some of the claimed benefits of cryotherapy include weight loss, reduced anxiety and stress, enhanced mood due to endorphin release, improved athletic performance, enhanced appearance, improved blood flow, increased energy, decreased asthma symptoms, decreased overall inflammation, increased libido, treatment of painful conditions like rheumatoid arthritis and more. Many cryotherapy websites even claim that undergoing cold air exposure works for anyone who is interested in improving their appearance or overall health, which is part of the reason why this craze has taken the health community by storm.

It has not always been clear whether or not the benefits of cryotherapy are as profound as some make them out to be. In fact, the claims of cryotherapy have been disputed by many experts over the years. Many studies on cryotherapy vary significantly from one another, so it is difficult to reach a clear conclusion about the facts. The FDA seems to agree that the evidence is limited since the organization released a statement that noted, “if you decide to try [Whole Body Cryotherapy], know that the FDA has not cleared or approved any of these devices for medical treatment of any specific medical conditions.” However, a recent review of the science around Whole Body Cryotherapy (WBC), had some interesting takeaways:

Whole Body Cryotherapy has been deemed generally safe by the majority of health professionals, but some people are advised to avoid it. WBC may worsen conditions such as high blood pressure, neuropathy (or nerve damage), allergy symptoms that are triggered by cold temperatures, heart disease, poor circulation and lung disease. There have also been some reports of people obtaining frostbite from cryotherapy thanks.

The takeaway for me, personally, is that cryotherapy may not be worth all of the hype it has received – especially considering it can cost hundreds of dollars for a package (you are advised to undergo multiple sessions). With that being said, the risk factors and side effects are pretty low, and I am a fan of testing out all different kinds of health modalities. So even though I am practically allergic to the cold, you may see me lose the clothes and hop into a cryo tank the next time I feel some soreness coming on. If I do decide to try it out, I will be sure to document my experience on Instagram, so be sure to follow me at @elissagoodman!

Sign up for my newsletter to receive this free resource and more!