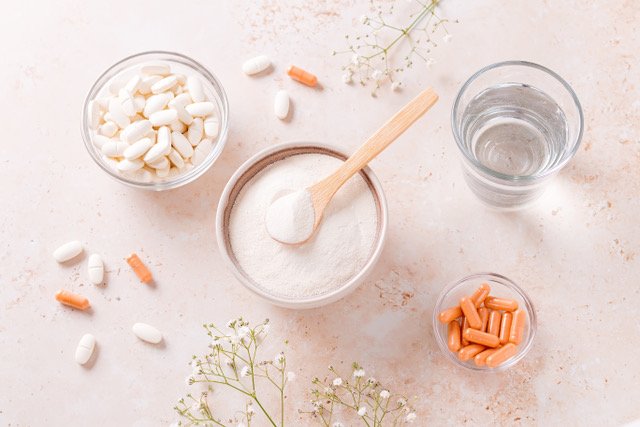 You’ve probably heard about peptides in skincare, but did you know that consuming peptides can ease inflammation, aid sleep, and promote weight loss?

Peptides are commonly found in creatine and collagen. Many fitness fanatics recommend adding creatine peptides, usually in powder form, to smoothies and bowls of oats. But creatine isn’t the only way to consume peptides; there are more peptide benefits than muscle growth. Collagen peptides are also standard for improving skin elasticity, fighting wrinkles, and improving gut health. I love collagen peptides for weight maintenance, better nails, and improved G.I. health.

But collagen and creatine peptides are only the beginning for peptides. New peptides called second-generation peptides are more effective and target specific problems like sleep, inflammation, and weight loss.

Peptides are very similar to proteins. They’re both composed of amino acids, but peptides have fewer amino acids than proteins. Peptides have an advantage over proteins because they’re quickly absorbed by the body so that it can use them up faster. Foods like eggs, flaxseed, and soy contain many peptides that the body can use. The most regular supplementation of peptides comes from collagen and creatine.

Peptides can also be part of life-saving medications. Insulin is a peptide used to help people with diabetes control their blood sugar. And that’s not the only necessary medicine that is made from peptides. Medications formed from peptides can manage severe chronic pain, treat short bowel syndrome, and are part of a therapy to treat HIV-1.

Think of second-generation peptides as super peptides. They’re even more efficient and exciting than original peptides! They’re modified in a lab to target particular problems.

Consuming peptides can lead to some incredible benefits. A 2019 study found that those supplementing with a collagen peptide supplement reported improved skin hydration and elasticity. Peptides can also protect against sun damage and treat skin wrinkles. They’re a must for combating aging skin!

A second-generation peptide, D.I.S.P., can help people achieve deep sleep and relieve stress and tension at night. It’s typically injected and practitioners generally recommend that D.I.S.P. be injected during the day to promote a restful sleep that night.

One of the most exciting peptides, BPC 157, can heal muscles, tissues, and the nervous system. Research indicates that this peptide can heal ulcers, skin rashes, and other inflammatory conditions. This peptide is typically used for inflammatory stomach issues like ulcers and weight loss. The BPC 157 peptide can either be taken as an oral supplement or injected into the inflamed area. Plus, there is some promise that this peptide can help those with celiac disease. Very early research also shows BPC 157 peptides could help build bone mass and prevent osteoporosis. To learn more about bone health, read my blog on the effects of aging on bone health.

And the buck doesn’t stop with bone health! There are three different peptides that studies report can affect weight loss efforts. 5 amino 1 nq and peptide-1 have some early research showing promise for overweight individuals and those with heart failure. Peptide-1 also promotes weight loss in people with diabetes and decreases food intake by about 15%.

How to Use Peptides

I recommend following the dosage and instructions on supplement packages and always consult with a doctor before starting any new supplements. I consume collagen peptides in my smoothies and follow the recommended dosage.

The dosage and application of peptides vary depending on the type of peptide. For example, second-generation peptides are sometimes consumed in pill form or injected into the body.

Although peptides are commonly found in animal sources of protein, there are also lots of plant-based foods that contain tons of peptides! Chickpeas, lentils, flaxseed, chia seeds, and hemp seeds are all excellent sources of peptides that the body can easily absorb! I love throwing a tablespoon of flaxseed and hemp seeds into my morning smoothie or on avocado toast for an extra boost. You can also incorporate peptide-rich chickpeas and lentils into your diet by making my delicious curried lentil & chickpea stew.

Peptides can make a difference in your sleep quality and inflammation levels. It can be hard to incorporate peptide-rich foods on your own. My S.O.U.P. Cleanse is perfect for nourishing your body with peptides from foods like flaxseed, chickpeas, and lentils (depending on what’s on the menu that season!). If you’re struggling to incorporate peptide-rich foods on your own, I recommend signing up for my S.O.U.P. cleanse.