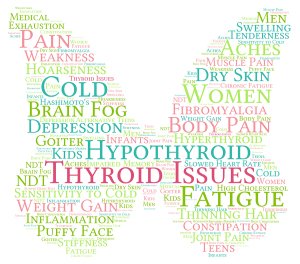 Anxiety, depression, memory loss, digestive issues and insomnia may seem like all too common symptoms experienced by the average on-the-go American–but if they aren’t going away, and come with a slew of other health issues, you could be one of the many people (myself included) who are struggling with Hashimoto’s.

Hashimoto thyroiditis, commonly known as Hashimoto’s, is now considered the most prevalent autoimmune disease out there, and it affects mostly women between the ages of 40-60. I struggled with the disease, and the many different symptoms for years before I even got diagnosed.

Hashimoto’s is a huge problem that not many people are talking about. So, I want to start a discussion and break down the symptoms, causes and more to show you why you should care about this condition that is affecting so many women (and men too!).

Hashimoto’s is an autoimmune disease that causes the chronic inflammation of the thyroid gland. It’s possible to live for years with Hashimoto’s without showing any signs or symptoms. Though, as it develops it can often lead to hypothyroidism, or the underproduction of thyroid hormones, and that’s when the real symptoms can start to kick in. The thyroid may seem like just a small gland in your neck, but it plays a role in so many different body functions–so when something’s wrong, it can really throw you off balance.

Thyroid hormones control the way your body uses energy, so when your body is not producing enough of these hormones, important processes in your body begin to seriously slow down. This can lead to feelings of fatigue, weight gain, fertility issues, depression and much more.

So, what causes Hashimotos?

The jury’s still out on what the exact cause of Hashimoto’s is, but there are a few things that researchers think might play a big role in its development in the body.

I’m not a doctor, but if you know there’s something wrong with your health it’s time to do something about it. If you’re experiencing any of the symptoms of Hashimoto’s you might want to ask your doctor about getting your thyroid checked! I’ve seen too many cases being missed because most doctors don’t perform the right blood tests so here is a link to know which tests to ask for and how to interpret them.

Hashimoto’s can be seriously taxing on your health and mental state, and so many people are struggling with it. To read about my experience with Hashimoto’s and how I was able to heal myself naturally, click here.