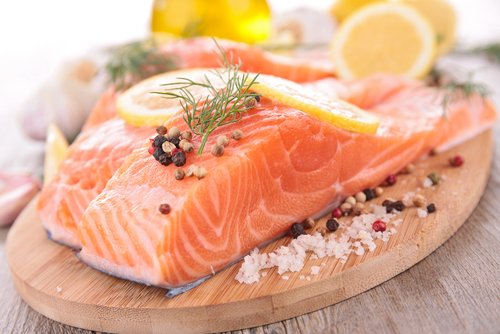 We’ve all been told that salmon, packed with heart-healthy omega-3s and belly-flattening protein, is a great way to get strong, lean and healthy. That’s why you’d better sit down before you read the next sentence.

What I discovered in my research—and why I advised my test panelists to avoid anything but wild salmon —was some really disturbing information: More than 90 percent of the fresh salmon eaten in this country comes from giant fish farms, not from nature. In fact, Atlantic salmon is 99 percent farmed, naturally white, and fed pellets that contain pink dye. Yuck! And unlike the proteins and fats that truly do help us lose weight, farmed salmon can have the opposite effect.

Wild salmon is naturally rose-tinted, a delicious side effect of the shrimp and krill in its diet. But because farmed salmon subsists on feed pellets made from ground fish and soy, its flesh is naturally beige. So salmon farmers add dyes to their feed to change the fish’s color from the inside. They can even use a convenient color chart, like the paper strips used to select paint colors in hardware stores, called the SalmoFan. It allows farmers to choose shades of flesh between pale salmon pink (#20) and bright orange-red (#34). Over the last several years, consumer lawsuits have forced some supermarkets to put “color added” labels on the packaging of farmed salmon.

To save money, salmon farmers add bulking agents like poultry litter (that’s poop) and hydrolyzed chicken feathers to the feed.

The more omega-3 and the less omega-6, the better. Finding a balance between the two is key, since one fights inflammation while the other tends to promote it. Wild Alaskan salmon is an omega-3 goldmine; just 3 ounces provide 1,253 mg of the stuff and just 114 mg of omega-6s. Farmed salmon has even more omega-3s, providing 1,705 mg in a 3-ounce serving. So far so good, right? But feed makers save money by bulking up the fish’s food pellets with soy, which increases the ratio of omega-6 acids. As a result, farmed salmon has 1,900 mg of omega-6s. So instead of pushing your 3:6 ratio in the right direction, you’re actually taking a step backwards.

Vitamin D, a crucial nutrient that leads to bone health, and can also reduce your risk of heart attack, is one fourth in farmed fish what it is in wild salmon.

Analyzing 700 salmon bought in stores from Edinburgh, Scotland to Seattle, Washington, a team led by Ronald Hites, PhD, of Indiana University, found that the farmed product contained up to 8 times more PCBs—cancer-causing industrial chemicals that were banned in 1979—than the wild variety. Other chemicals found in farmed fish include dioxins from herbicides (the most famous being Agent Orange).

Salmon farms attract a disgusting marine insect called sea lice; to get rid of these parasites, farmers spike their feed with a marine toxin called Slice, or ermamectin benzoate. The pesticide is also used to rid sick trees of pine beetles. When administered to rats and dogs, it causes tremors, spinal deterioration and muscle atrophy.

In Chile, where the majority of our farmed salmon is raised, baby salmon (called smolt) are raised in freshwater lakes rather than in hatcheries, where native species can pass parasites to the juvenile salmon before they are taken to the ocean. Several cases of intestinal parasites in humans have been traced back to raw farmed salmon.

Due to the concentration of contaminants in the salmon, Hites and his team concluded that “the majority of farm-raised salmon should be consumed at one meal or less per month.” In the case of Scottish salmon, they recommended that those who wish to avoid cancer-causing chemicals have no more than three farmed-salmon meals a year.

Don’t let salmon’s relatively high calorie and fat content fool you; studies suggest the oily fish may be one of the best for weight loss. (In fact, it makes our list of the fatty foods that will help you lose weight.) In one study, participants were divided into groups and assigned one of three equi-caloric weight loss diets that included no seafood (the control group), lean white fish, or salmon. Everyone lost weight, but the salmon eaters had the lowest fasting insulin levels and a marked reduction in inflammation. Another study in the International Journal of Obesity found that eating three 5-ounce servings of salmon per week for four weeks as part of a low-calorie diet resulted in approximately 2.2 pounds more weight lost than following a equip-calorie diet that didn’t include fish. Wild salmon is leaner than farmed, which is plumped up on fishmeal; and it’s also proven to be significantly lower in cancer-linked PCBs. So go wild—literally!

You might be surprised to learn that steamed white fish like halibut tops fiber-rich oatmeal and vegetables in the satiety department. The Satiety Index of Common Foods, an Australian study published in the European Journal of Clinical Nutrition, ranks it the number two most filling food—bested only by boiled potatoes for its fullness factor. A separate Australian study that compared the satiety of different animal proteins found a nutritionally similar white fish (flake) to be significantly more satiating than beef and chicken; satiety following the white-fish meal also declined at a much slower rate. Study authors attribute the filling factor of white fish like halibut to its impressive protein content and influence on serotonin, one of the key hormones responsible for appetite signals. Just make sure you avoid tilapia.

A half dozen order will set you back a mere 43 calories (the equivalent of a single Saltine cracker!), and provide 21 percent of your recommended daily allowance for iron, deficiencies of which have been linked to a significant increase in fat gene expression. What’s more, oysters are one of the best food sources of zinc, a mineral that works in tandem with the “I’m hungry!” hormone, leptin, to regulate appetite. Research shows overweight people tend to have higher levels of leptin and lower levels of zinc, in comparison to lean folks. One study in the journal Life Sciences found supplementing with zinc could increase leptin production in obese men by 142 percent. Get a shuck-load of zinc, naturally, with oysters—just six fulfills your recommended daily need by 200 percent!

One study in the journal Nutrition, Metabolism & Cardiovascular Diseases found that eating five servings of cod per week as part of a low-calorie diet for eight weeks resulted in an extra 3.8 pounds of weight loss compared to a diet with the same amount of calories but no fish. And a second study in the European Journal of Clinical Nutrition found that people ate 11 percent less at dinner after having cod for lunch versus those who ate a beef lunch. Researchers attribute the satiating and slimming properties to cod’s high protein content and amino acid profile, which can help regulate the metabolism.