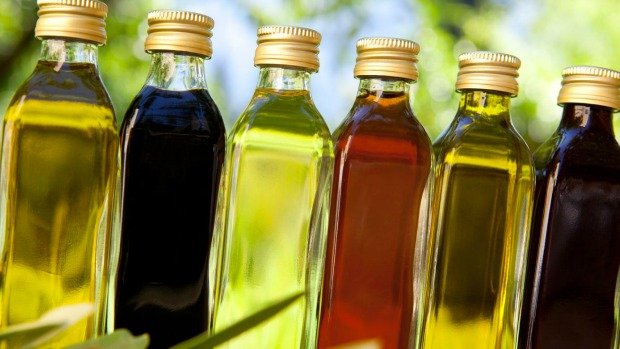 Sometimes being a nutritionist feels a lot like being a detective- especially when I’m out to eat! When I’m dining out at a new place, I often feel like I’m giving the waiter the third degree (much to the embarrassment of my kids when they’re with me). Even some of the seemingly healthy restaurants have some seriously flawed ingredients. The most guilty category seems to be in the fat/oil department. Those aiming for vegan lifestyles can often fail to realize that even some plant based oils are bad news. Oils are a processed food and are one of the most common problematic ingredients that can unknowingly causing us harm. Grapeseed oil is among the guilty in that category.  Not only does it have little to no nutritional value, but it also has some really harmful effects.

What is Grapeseed oil?

Derived from the seed of grapes, Grapeseed oil is a colorless, odorless, and tasteless, making it a popular ingredient in dressings. Grapeseed oil is also super cheap to make making it a tempting choice for restaurants trying to skimp on quality without affecting flavor. Using industrial and chemical processing, companies are able to create a sellable product out of what would otherwise be tossed out. (Most of the grape seeds are a bi-product of the wine industry)

Grapeseed is high in Omega-6 fats

You may have heard how important it is to keep a balanced ratio of omega-6 to omega-3 fats. Ideal ratios range from 1:1 to 1:4 in favor of omega-3. However, the standard American diet ratio is about 1:25, in favor of omega-6’s. Cue the horrified face emoji. The reason the ratio is so high is a lot to do with omega 6 seed oils, like grapeseed, being so overly used in processed foods. Omega 6 is responsible for inducing an inflammatory state, which is implicated in almost every chronic illness from diabetes to autoimmune conditions.

Grapeseed is an easily oxidized fat which turns it toxic

Grapeseed is mostly polyunsaturated. This means the bonds that make up the structure of the fat are only partially paired, making it weak overall. Heat, light, and time breakdown those bonds and create an unstable molecule, essentially a free radical. These types of molecules create even more inflammation and have also been linked to things like cancer.

A chemical called Hexane, is used to press the oil from the seed. Hexane is a known pollutant but is still approved for use in food because of its small amounts. Long term, low level exposure in foods, however, haven’t been studied in humans. I don’t know about you, but Hexane just doesn’t sound like something I want in my body.

Like many other vegetable oils, grapeseed oil must go through a process that deodorizes it. This way even when it’s rancid, you won’t be able to tell (gross!). Even worse, the process of deodorization actually creates small amounts of trans-fats. Trans fats are incredibly harmful to health and are found nowhere in nature. Because they’re in such small amounts, they aren’t required to be labeled as containing trans fats. Trust me, you don’t want even the smallest trace of this stuff in your diet!

Polycyclic Aromatic Hydrocarbons, also called PAHs, are a category of chemicals formed as a result of combusting oil, gas, and coal. They’re widely found in our food and are known carcinogens. Vegetable oils like grapeseed, happen to be extremely high in PAHs. Yuck!

How to avoid Grapeseed Oil

Even some healthy restaurants make the mistake of including unhealthy oils in their recipes. Always ask about the types of oils used in cooking, dressing, and sauces. If you have the choice, always request Extra Virgin Olive Oil as a replacement. For dressing, a simple olive oil and vinegar combo can do the trick and help you avoid toxic oils like grapeseed.

But, let’s be honest, you can never be fully sure what’s in your food unless you are preparing it yourself. I recommend olive oil, avocado oil, walnut oil, grass-fed ghee, and coconut oil as my first choices for cooking, dressings, and sauces.