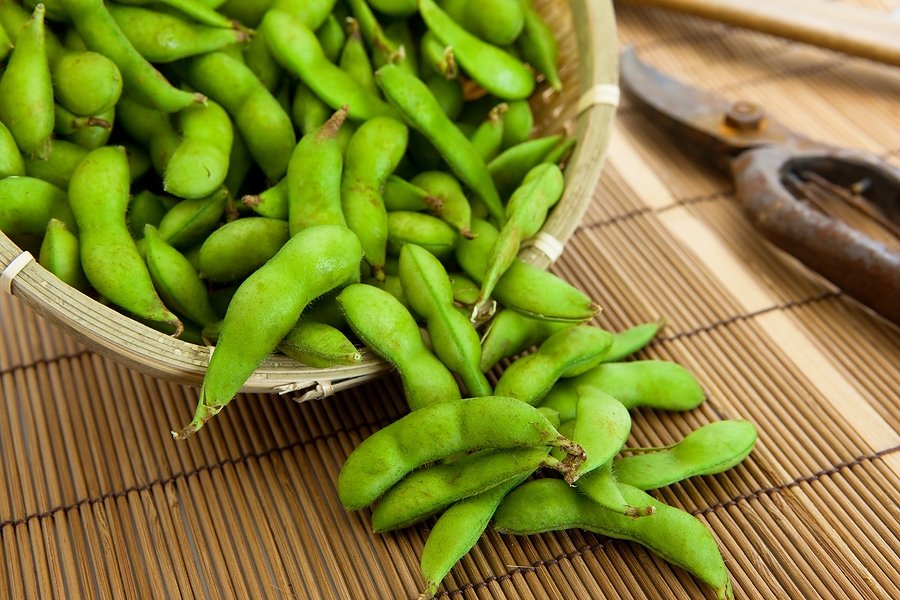 I was at a crossroads with soy several years ago. News came out that soy was a NO, and I had a slight breakdown. I ate soy regularly. Should I be worried that my daughters love edamame? Do I need to ban my brown rice tofu bowl? Am I ever going to have the tempeh from M Café again?!

Like any other dietary restriction placed on us from conventional medicine, it left me a little baffled.  I mean, some of the healthiest cultures in the world consume soy daily! Is it really that bad? Spurred by my love of food, quite selfishly, I set out to discover all I could about soy, mainly so I could justify still eating it. My research about soy led to the following five takeaways:

1.  Not all soy is created equal.  You must be a diligent shopper. 90% of all soy beans grown in the U.S. are genetically modified and mostly not produced for human consumption (we’re talking pet food and refined oil).  You want to purchase ONLY organic, non-GMO soy, in its whole form.  That whole form can be dried soy beans, served as full fat soy milk, fresh raw beans (edamame), tofu, or fermented soy in whole form miso, tempeh, or natto.  You must consider processed soy, just as you would all other processed foods.  When soy is put through the “manufacturing” processes, it is literally broken down into estrogen.  Stay away from: Soy Protein, Soy Protein Isolate, Soy Flour, Soybean Oil, and “frankensoy” products.  Foods like these are also likely to be loaded with added sugars, fats and refined flours (also commonly found in soy based yogurts, ice cream, and soy cheese).  If you see those words above on the ingredient lists, stay away!  Look for “Whole Ground Soy” in your soy substitute ingredients, and lucky for you, soy products with Whole Ground Soy isn’t terribly hard to find.

2.  Soy and your health issues.  At some point, you may have been told that you need to eliminate soy from your diet.  It’s common for women with hormonal issues to be told this, it’s also common for soy to be a suggested diet elimination when you have thyroid issues, immune disorders, or history of estrogen related cancers, such as breast or ovarian cancer.  When you are consuming any type of processed soy, like soybean oil or soy cheese made with soy protein isolate, this would be cause for concern.  At its broken down form, when over-processed, soy is estrogen.  In its whole form, however, soy provides completely different properties.  If you have these issues and want to incorporate soy, whole soy is the only way to go!  Soy is labeled a “goitrogenic” food, meaning it can cause thyroid glands to enlarge, but the term is loose.  Goitrogenic foods don’t have a history of causing any issues for anyone who is healthy, meaning eating them will not create issues for you if none exist.  The goitrogenic affect on those with already existing thyroid issues, seem to be arbitrary and minor.  There are so many other factors that can enlarge our thyroid glands, that the wellness community is hesitant to place heavy blame on goitrogenic foods.  An exercise in moderation is a good rule of thumb.  One area where I recommend soy elimination would be for those suffering from kidney or gallbladder disease.  There is enough evidence to show the oxalates (simply put, an organic acid, produced by food that can crystalize inside our bodies and cause issues to kidney and gall bladder) in soy is high enough to trigger inflammation and burning pain, as well as contribute to kidney stones.  In my opinion, not worth it!

3.  East versus West.  Why is it that Eastern cultures have incorporated soy into their diets for hundreds of years with no soy controversy and seemingly great health?  It’s hard to study the true effects of soy in our culture, because we have been eating a completely different food…we have been mainly consuming processed soy (soy that has been dehulled, crushed, or processed with solvent extraction)!  In Asia, soy is only consumed in its whole form and often served fermented.  People of this culture have been found to metabolize some of the phyto-nutrients in soy at a higher rate than our culture.  Differences in gut flora, metabolism, and our genetics, all play a role in why soy is converted differently than our Eastern counterparts.  Another thing to consider, Eastern culture’s consumption of fermented soy is many times greater than ours as well, which is a contributing factor, being that fermented soy contains much needed healthy bacteria for gut health and higher levels of cancer fighting phyto-chemicals.

4. Soy can provide incredible nutritional benefits.  Soy in its whole state, is considered a nutritious food, both for its fiber and protein content (equivalent to protein of an egg), as well as its amounts of folate and vitamin K.  The protein of soy is unique, in that soy contains a protein called peptides.  Peptides are associated with heart health and blood pressure.  Soy also provide higher magnesium and iron than comparable intakes of animal protein.  The most backed health fact on whole soy, is its ability to lower LDL or “bad” cholesterol.  The chemical in soy, called isoflavones has been shown to balance cell growth and actually prevent some cancers.  Certain isoflavone’s contribute to immune function as well.  Soy also contains anti-oxidants, in the form of genistein and phenolic acid, helping to kill free-radicals and fight off disease.

5.  Everything in moderation!  I never recommend a high amount of soy in any diet.  If you are using soy as a substitute for meat daily, I would consider using other plant based proteins more frequently (ask me what!).  If you have thyroid issues or hormone issues, and high risk of estrogen related cancers, you will want to pay closer attention to your soy intake, being most especially careful not to consume any processed soy.  However, a moderate amount of whole soy is what I recommend (in my opinion, no more than 3-4 servings per week).  I also believe that adding more fermented whole soy into your diet is a great idea, as fermented soy has shown to be beneficial in cancer prevention and benefits your gut health.  Open yourself up to try miso and tempeh more often!  I am for complete elimination of any processed soy products or genetically modified soy in your diets (and your pets too!).

As more people in Western society eat soy healthfully, meaning organic and as a whole food, the research on the effects of soy on us will be more widely available.  The good news is, research on soy’s contribution to cancer and heart health, is still coming to the forefront.  Feel free to share what you know and ask questions!