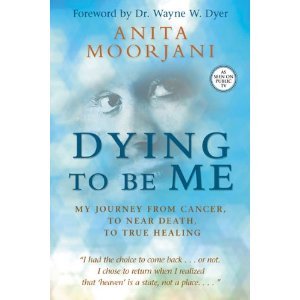 The kids are all settled in for the summer so my fiancé and I decided to get some R&R in Cabo for the weekend. We went to a beautiful resort in Cabo, which I’ll tell you about in my next blog post. While there I had a chance to read a book that profoundly affected me. It’s called Dying To Be Me written by Anita Moorjani. It’s a true story about Anita not only entering death’s doorway, but entering its halls too. She remembers it so vividly that she is able to tell her story in a way that I found to be completely real and believable.

Anita was dying of lymphoma. She had several tumors the size of lemons throughout her body. Her organs were failing and she was given hours to live. While this happened, she remembers leaving her body and visiting the other side. She was given the opportunity to return to her body, and chose to do so. Within days her tumors began to shrink, and within months she was declared cancer free by her doctors. She experienced a true miracle!

She explains a lot of mind-bending things in this book, such as time is not linear as we perceive it, but rather everything is happening at once. Every moment, at once. So time isn’t passing, but we’re moving through time. I’m still trying to wrap my head around that!

She talks about how illness is not caused by anything we’re doing wrong in the physical sense. It’s caused by our fears. Our ego can stand in our way of living a healthy life. I believe this fully. I’ve been a very fearful person most of my life. I was terrified if I said or did anything wrong as a child. I’ve always been so afraid of failure, which many times over has resulted in just that. Many years ago, I moved from NYC to LA and I was terrified of starting all over again in the advertising business. How was I going to start from the bottom again and work my way back up and not fail. One day, Vogue magazine approached me to interview for a job. I was ecstatic – any girls dream job! I thought I could put aside my fear of failure for this job. I got the job and I became practically paralyzed with fear – have you seen The Devil Wears Prada? ;). It was the most fast paced and demanding job I had ever had! A month into the job, I was diagnosed with Hodgkins.

Now I’m incredibly lucky, because I get to work in a profession where I dictate the pace and I’m passionate about it. There are still times when my fear raises its ugly head. After reading this book I feel even more committed to taking steps toward eliminating fear from my life, and enjoying life with abandonment. I know I can do this. I highly recommend this book if you suffer from any kind of fear or stress which most of us do. It will definitely help you be easier on yourself which is my #1 prescription for a healthier