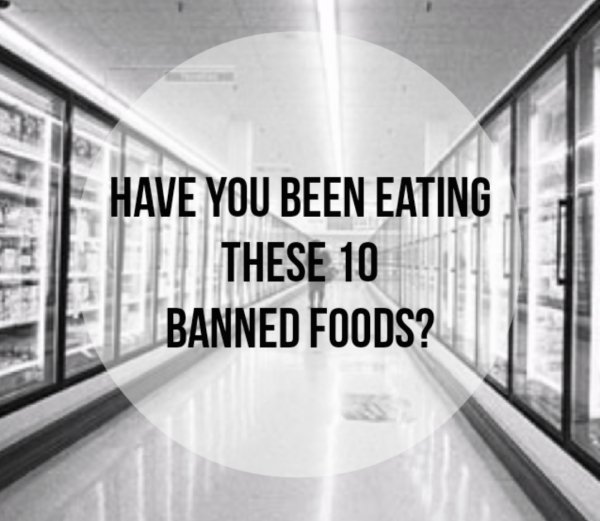 “In the 21st century, our taste buds, brain chemistry, biochemistry, hormones, and kitchens have been hijacked by the food industry.” – Mark Hyman, American physician, scholar, and author.

Here is some real food for thought.

Imagine a world where people have stood up and agreed that certain toxins and chemicals should not be allowed in their food supply. Where people collectively agree that their food shouldn’t be poisoning their children and diminishing their health. This has been a reality for many countries across the globe, but sadly not America.

The truth is, food companies exploit Americans.  They sell foods they know are laced with toxins and chemicals. When certain ingredients and foods are banned in other countries, you need to ask yourself, are these banned foods contributing to increasing rates of disease and mortality?

The following ten foods are sadly sold in America and consumed on a daily basis. You may not currently have the power to ban these foods, but you do have a choice to stop your consumption of these ten foods:

There’s no doubt that salmon is a rich source of omega-3 fatty acids, B-vitamins, and protein, however, not all sources of salmon are equal. When salmons are farm-raised, they are fed unnatural diets that are high in GMO’s. Although farm-raised salmon tends to be fattier than wild-caught, they contain 50 percent less beneficial omega-3 and less protein.

Being less nutritionally dense is not the greatest concern here. Farm-raised salmon are given drugs and antibiotics that are not safe for human consumption and our bodies can not excrete these toxins fast enough. Up to 90 percent accumulate in the body and can even be passed on to newborn children through breast milk.

Where it’s banned: The European Union

In the 1990s, Hawaii papaya crops were devastated by ringspot. In order to counteract this threat, genetically engineered (GE) papayas were produced that were resistant to this virus. Within just five years, 20,000 non-GMO seeds were found to be contaminated by these GE papayas.

Unlike Europe, the US has continued to import Hawaiian papayas, even though animals fed genetically modified foods suffer from a number of health issues, ranging from birth defects to multiple organ failures. By the third generation of offspring, animals fed GE foods were nearly sterile.

Originally used to treat asthma, ractopamine is a drug that’s given to livestock in order to reduce the overall fat content of the meat. Within the United States, it is used as a muscle relaxer in 45 percent of pigs, 30 percent of ration fed cattle, and an unknown percentage of turkeys. Why is this an issue?

Veterinarian sources say that up to 20 percent of this drug remains in the meat once it’s bought at the supermarket. It’s known to affect the human cardiovascular system, causing issues in behavior, increasing hyperactivity, and producing chromosomal abnormalities.

Where it’s banned: Europe and Japan

Nothing like washing down your dinner with some flame retardant. Brominated vegetable oil was first developed by chemical companies as a flame retardant, however, it’s now found in a range of citrus-flavored drinks, such as Mountain Dew, Gatorade, Fresca, and Powerade.

It was approved in 1977 and has since shown to accumulate in human tissue and breast milk. In animal studies, large doses have been found to cause reproductive and behavioral problems. Further risks include major organ damage, birth defects, growth issues, and iodine deficiency.

Where it’s banned: Norway and Austria

The Standard American Diet is packed with processed foods that contain more than 3,000 food additives. Research has shown that this array of additives is linked to behavioral issues, cancer, birth defects, and allergy-like hypersensitivity reactions in children.

Where it’s banned: The European Union

Arsenic-based drugs make animals grow quicker and the meat appear pinker. As of 2007, 70 percent of the nine billion broiler chicken were still fed Roxarsone, an arsenic-based drug used within the feed. Although Pfizer stopped marketing this drug in 2011, there are still several others on the market.

Brominated flour has been ‘enriched’ with potassium bromate. Companies claim that this additive makes the dough more elastic and is typically found in bread, wraps, bread crumbs, rolls, and bagel chips. It has been linked to kidney and nervous system damage, cancer, thyroid issues, and gastrointestinal discomfort.

Where it’s banned: The United Kingdom and Canada

Typically found in chips and french fries, Olestra (also known as Olean) was created as a calorie and cholesterol-free substitute for fat-free snacks. Time magazine named Olestra as one of the worst 50 inventions ever created and rightfully so. This fat substitute have been shown to cause weight gain in rats, create adverse intestinal reactions, and an overall depletion of carotenoids and fat-soluble vitamins such as A, D, E, and K.

Where it’s banned: The European Union and Japan

BHA and BHT are toxic preservatives that are typically found in butter spreads, beer, chewing gum, nut mixes, meat, cereals, and dehydrated potatoes. When studied in rats, BHA was shown to cause cancer and may be cancer-causing in humans. The risks associated with BHA are allergic reactions and hyperactivity, while BHT can cause organ toxicity.

This is a synthetic version of a hormone that’s naturally found in cows’ pituitary glands. These growth hormones are injected into 1 in 6 US dairy cows in order to increase milk production. Cows that are injected with rBGH often suffer from at least sixteen adverse health effects, including mastitis, contaminating milk with antibiotics and pus. It’s believed that exposure of rGBH can lead to colorectal, breast, and prostate cancer.

After reading that list, you may feel slightly cheated. Why is it that some countries have stood up to these additives, growth hormones, and genetically modified foods while the United States has been left behind? It’s not great that highly processed and toxic foods are available to us, however, it is great that there are plenty of alternatives.

You have a choice and that’s very powerful, use it to your advantage. The choices you make will be reflected in your health. No need to consume arsenic-laced chicken when you can source fresh, organic whole foods. The food industry may have hijacked your taste buds, but don’t allow them to hijack your health. Choose wisely.