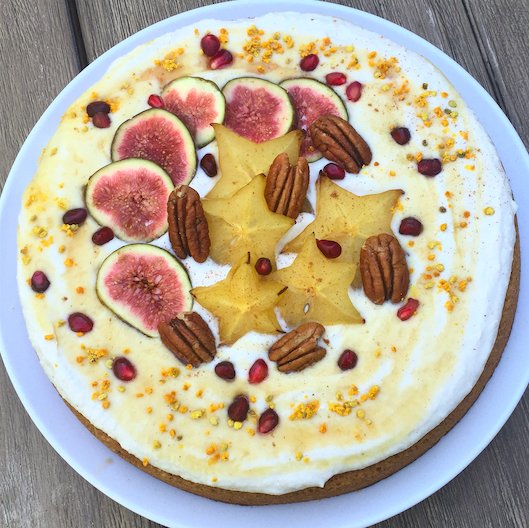 I don’t run around like one of those elitist health gurus who haven’t had a potato chip, drop of soda, or much less a slice of cake in forever types, and I’m not saying this for attention or praise, but I’ve been blessed with a sugar shunning disposition.  I just don’t have an affinity for the sweet stuff – lucky me (we can talk about all the other “bad” things I do have an affinity for another time…).

Well, sugar lover or not, you will be glad to know that this recipe brought me to my non-sugary knees.  If you are a dessert person, you can safely make knowing you can simultaneously indulge and be healthy at the same time.  If you’re not, like me, you may be satisfied in knowing that this is one dessert that actually knocks your socks off while you still keep your non-sweet reputation.  Either way, it’s delicious!

For the Greek Yogurt Meringue:

fruits of your choice (I used fig, starfruit, and pomegranate seeds)

In a bowl, use a hand or stand mixer to whip greek yogurt into stiff peaks, additionally add 1 tsp. of cinnamon and 1 tsp of honey for extra flavor.

Directions for the cake:

Spray a 9-inch round pan with coconut oil cooking spray.

In a large bowl, stir  flour, salt, baking soda and cinnamon together.

In a separate bowl, whisk egg whites until firm peaks.

At the end, fold in blueberries, nuts and whipped egg whites. Combine well. Pour into the pan outfitted with parchment paper or non stick spray.

Bake for 20 to 25 minutes, or until a toothpick inserted in the center comes out clean. Cool completely and flip onto a cake platter.

Decorate with whipped topping and whatever ingredients you like.